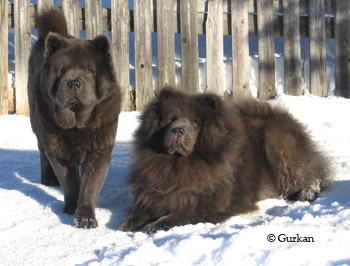 Always remember the maxim: "A Dog is for Life, not just Christmas"
As a slow maturing breed, the Chow Chow can still be rather active at 12, and a good number live until they are 15 - 16 years old. It has given you many years of absolute devotion and love - it is now your turn to show it more than the usual attention and love...

Physical changes:
The gradual degenerative changes usually have already started by the age of seven years, though you may not have observed them. In appearance a chow chow does not often go grey around the muzzle, and the coat usually stays quite dense. In spayed bitches the coat does not shed as it used to before the spaying occurred (usually along with the hormonal cycles). Coat quality can be dull and lifeless and obesity set on very easily, when an older chow chow is fed on incorrect diets. 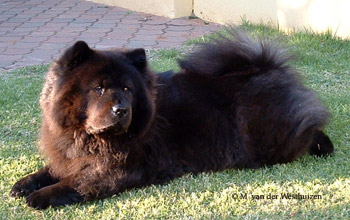 Bathing the older chow chow is as important as before, but be sure to use warm water even in summer time and be sure to dry them completely as they can more easily get kidney infection or other concerns. Maintain the grooming until the Chow's dying day - it enhances their feeling of well-being and maintains a bond of love you share. Bear in mind that the skin becomes more sensitive to brushing and this should be done with a gentler hand than when done in it's youth. Keep the anal and vaginal areas clipped clear, as it is easy for them to foul these areas as their aged limbs,joints and organs do not function as well as before.

Sight and hearing will gradually fade, so they may actually not hear you calling when in a deep sleep or may not see - as before - the neighbours' cat as it steals into your property. Take particular care with vehicles around a sleeping older Chow. Inclement weather seems to creep up on the older Chow and it is often caught sleeping in a drizzle, slowly getting wetter than it should. Be careful of them getting too wet or staying wet, as the circulation is no longer as good as before and they can catch a chill more easily. Inclement weather also affects arthritic joints and they may feel more pain during these times. Pain is often manifest as mild aggression, and when a chow chow exhibits unusual unsocial behaviour, it may very well be due to pain. 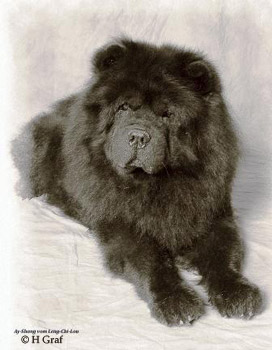 The teeth accumulate tartar more easily and gingivitis can easily cause infections in both the oral cavity as well as the digestive tract. Make sure their teeth are well maintained. The nails are not run off as well as before, so do regular nail trimming to make walking an easier task (particularly in the case where arthritis is causing difficulty walking). Your older Chow still needs regular exercise, but will not be able to do the same distances as before. Be sure to keep them fit within their physical limitations.

Feeding times can be increased to twice a day, but make meals smaller, as their more inactive state will quickly lead to obesity. A well formulated diet for the older dog is of critical importance as it's digestive tract can no longer absorb nutrients as before. Be sure to consult your veterinarian if you are unsure about your choice of diets for the older Chow Chow.

As your Chow ages, kidneys, liver and heart seem to lose their ability to funtion well. The Chow Chow seems to be prone to stomach cancer. More details can be found in the section under Chow Chow Health.

Psychological aging:
The knowledge that it can no longer keep up, does not seem to get through to the older Chow Chow quite as it should. Your dominant character will remain such and often attempt to assert it's dominance to it's severe detriment. The more submissive character will become less involved and can easily be overlooked. Correct management of the older Chow Chow in a multi dog household will become more critical.

Older Chows need company, it keeps them "young" in spirit and keeps up a moderate activity level. However, avoid exposing the older Chow Chows to too much teasing and playing of a boisterous pup, as it can become irritated by pain and may snap at the pup or get involved in a fight. Also avoid it being "run over" by an overly eager pack of younger dogs playing.

An older Chow will often manifest it's confusion or pain through aggression & snapping. It is the owner's loving responsibility to provide sufficient space for the older dog to be able to function at it's physical and psychological limitations.